Today has been kind of a strange day and we'll leave it at that? I did buy a second bookshelf, though, as it was much needed for my room to be more organised.

I had the idea for today's look brewing in my head since last night. Glitter and false lashes were a must, and I imagined the dramatic Slytherin look to be a bit old glamour but more colourful. Green and silver figure heavily into the eyes (and brows!) but it's grounded with black eyeliner. Contouring was a must, as well, though I didn't spend as much time on it as I thought I would. Anything too sculpted would compete too much with the eyes. (Plus, I started this look kind of late and was rushing toward the end...) 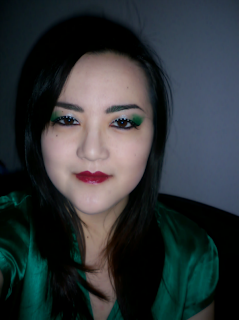 Excuse the hair, please. I wanted to straighten it until it was poker-straight, but I had to take pictures and scrub my face before heading down to dinner. I did consider doing finger waves, but I definitely didn't have the ability to focus on that today. Also, working with glitter is tough--I didn't have precision using my fingers to press on the glitter, so the green is a little sloppy. But hey, glitter is glitter and it looked pretty good regardless!

After applying eyeshadow primer, take a loose silver eyeshadow and press it on the inner 2/3s of your eyelids, and take a loose green eyeshadow to the outer 1/3. (I had to use a pressed eyeshadow beneath a loose one to get the colour and intensity I wanted.) Thoroughly blend where the colours meet!

The trick to getting the perfect, clean line/wing is to use tape. Follow the line of your lower lid for the best angle.

Over the eyeshadow, take a tacky glitter base and press it over your lid, letting it dry slightly, and then lightly press glitter to the lid. Line both your upper and lower lids--I used a liquid liner on the upper lid and a pencil on the lower lid. Create a wing, if you'd like. Curl your lashes, apply some mascara, and if you'd like to go full out, put on some falsies! I have this lovely pair that has crystals on the base and I thought they would be perfect. My brows are also filled with dark green eyeshadow, but if you aren't a crazy brow person, you should consider using an eyeshadow or brow powder that is slightly darker than your hair colour for dramatic effect.

For the face, start with a medium-coverage foundation all over and use a concealer to cover up any redness. Take a foundation about two shades darker than your skintone and blend it into the hollows of your cheeks, your temples, just below your jawline, and around your hairline. I skipped blush, but you can use that here, too! Take a shimmery liquid highlighter and dab it on top of your cheekbones.

You'll see that I did my foundation after the eyes. This makes it easier to deal with fallout from the glitter, and that way the tape that you used for the wing doesn't take off any base you've put on already.

I don't know if you've noticed, but I've had a lip colour for each house, too: red for Gryffindor, nude for Hufflepuff, pink for Ravenclaw, and plum for Slytherin. The dark lips will appear again in the everyday look, though they'll probably be a little more subdued! 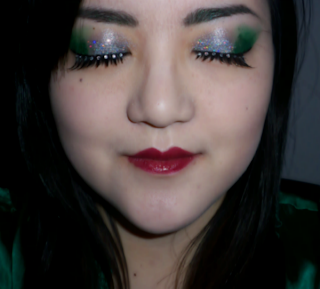