my favourites for autumn!

Sorry about going quiet for a few days! My sister came home from university for the weekend, which is usually means a hectic weekend anyway, but then my mom broke her toe whilst we were closing up our pool for the year. I've been busy running errands the past few days, but I wanted to make a post of my current favourite products for fall. (Note: all colours listed next to the full product names are the ones more or less provided by the brands themselves! This is how I'll be listing colours for all of my posts.)


(If you notice the marks on my wrist to the left of the first swatch, they're from hair ties! I always have at least two and they tend to leave dents.) I'm the sort of person who changes her favourite products often, and while the following products all seem to be very in for fall, I make no guarantees that that trend will continue! It was really hard not to swatch a nice teal eyeshadow because those tend to be my favourites. One day I'll swatch my Fyrinnae eyeshadows and you'll see just how many teal blues I have just from that brand.


First the eyeshadows! These are rich neutrals or jewel tones that are commonly associated with the season and they're all perfect for a smoky eye that isn't your typical black. 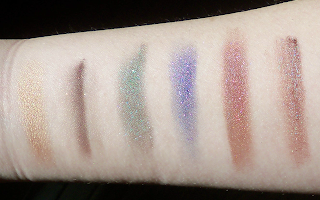 
Urban Decay is well-known for their amazing, shimmery shadows, and Half Baked is no exception. I only own this as a part of the two Naked palettes, but you can purchase this on its own. It's a lovely, true gold that looks good on everyone, whether you use it as a sheer wash over the eyelid or as a part of a darker, more mysterious look.

Shiro Cosmetics is such a good indie brand and I really encourage everyone to check it out because some of my all-time favourite eyeshadows are from this company. The colour I swatched has the most ridiculous name and it was one of the colours of the month from last year that is still available now. It's this luscious, deep brown with the most gorgeous golden sparkle overlay and the photo does it absolutely no justice.

Sugarpill is a brand that everyone is starting to know these days and they deserve it--such richly pigmented eyeshadows that are versatile in so many ways. Junebug is a darkened green that looks absolutely beautiful when it catches the light, while Weekender is a very pretty purple that seems to work on every skintone. These are two jewel tones that everyone should own!

Makeup Geek recently added loose pigments to their product line and they're an absolute godsend, filled to the brim with so much product that I feel like I'll never run out. Enchanted is this reddish plum colour that looks really intimidating in the jar, but it can be applied so sheerly that it looks amazing on everyone. Insomnia is a dupe for MAC's Green Brown pigment and it looks so freaking cool when it catches the light.

Next we have eyeliners. There are only three because I'm partial to using eyeshadows as liners, but maybe I'll include my favourites in a later post. 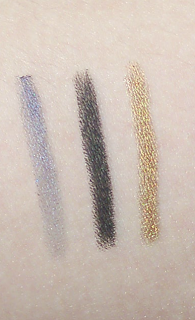 
UD eyeliners are SPECTACULAR. There is really no other way to describe them--they really do glide on. I have really oily eyes so they don't stay on as long as they claim, but I love them all the same. Binge, the lovely deep denim blue, was unfortunately discontinued but you might still be able to find it at certain retailers. Of the current line of UD eyeliners, I'd say LSD or Sabbath are close, but not quite dupes. NYX's eyeliner in Sunrise Blue is also close, but it's a bit brighter.

Speaking of NYX, the gold eyeliner is amazing and I've used it in so many looks/face charts for others that it's almost ridiculous. I originally bought it because it's a dupe for the UD eyeliner in Honey that was discontinued, but the formula is outstanding on its own.

I considered recommending face products, but I'm pale and use something different almost every time, and I usually forgo blush because I have rosacea. Sooo, here are the lippies! 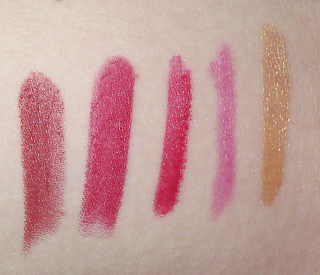 I've had the Maybelline lipstick for about a year--yes, I do cheat and keep makeup products longer than is recommended, I know it's not the best thing to do, but I'm a packrat!--and I will wear it year-round. As a stain, applied thickly, with gloss over it, I don't care how I put it on, I love the colour of it.

The Sephora lip colour was actually recommended to me by my friend Toni who works at the Sephora near my university campus and damn, is it a beautiful colour. It's basically matte, so you can put a gloss over it for a different finish. But hey, matte lips are in for fall!

NYX is a "drugstore" brand that has high-end quality and the soft matte lip creams are a rave product. I've actually only worn this colour once, but it's such a gorgeous pink-red that it deserves a mention. I'll be wearing it more often this season!

Here's a little confession: I actually don't wear lippies most of the time because I have bad habits of pressing my lips together and I hate getting lipstick or gloss on anything. Revlon's balm stains, however, are quickly changing that. They're semi-glossy and sheer, but they can be layered or built up until they reach a pretty bold colour. I own two, Smitten and Honey. Honey is my My Lips But Better shade, and Smitten is more of a fun, spunky colour. The gloss wears off rather quickly but leaves behind a stain that can last hours.

The final swatch is of a product I actually received in the mail only yesterday. Dreamwold Hermetica had promotional packages available for only $5 and I jumped at the chance. I have a bunch of samples that I'll review later, but the lip gloss that came with the samples was so perfect for fall that I couldn't resist adding it here. The website calls it light brown, but I think it's a nice, slightly deep gold that looks good sheerly on the lips but can also be built up or layered over another colour.


Okay, phew, that was a lot! If you would like a list of possible dupes for these products, please don't hesitate to ask because I can do some digging. I'll be doing a look soon with some of these products just for autumn, so look out for that.
Posted by Jen at 7:37 PM