halloween looks - do, a deer, a female deer

The weekend is high time to experiment with Halloween makeup, and I found some inspiration whilst Googling around. Sometimes painting your face to resemble an animal is really entertaining and it's a great potential costume. All you need to add is some brown clothing if you don't want to go all out. 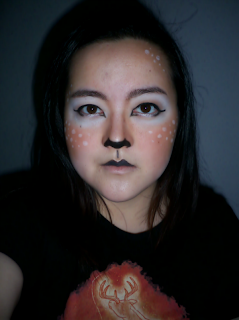 Interestingly enough, I'm wearing a shirt with a stag on it. It's actually a Harry Potter shirt with Harry with his patronus in red on the front, and Voldemort with his snake patronus in green on the back. You may also notice that my hair looks different here--hello, massive forehead!--I always wear a headband to keep my hair back whilst doing makeup that requires more than a quick fill of the brow and some lip balm. My bangs happen to fall directly in front of my forehead and have started to cover my right eye. 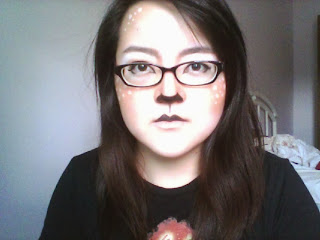 I actually wrote up a step-by-step instruction guide to getting this look. Obviously this would have been better if I had pictures of each step, but I'm really hasty with my makeup application sometimes and I have no idea how to take photos of myself whilst I'm putting makeup on. It's something I'm trying to teach myself!


This sounds a lot more complicated than it actually is--the worst part is the eyeliner, and if you can't tell, that's what I managed to screw up big time in these photos! If anything, I'd advise practising the eyeliner ahead of time. The rest of it will fall right into place. Here's the full list of products. 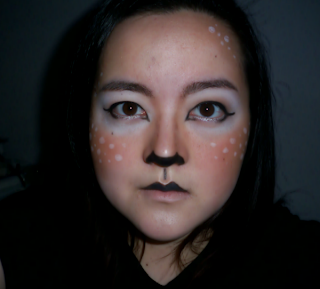