Halloween is so close! I don't have much of an occasion for an excuse to dress up, but I've decided that I'm going to be an older Wednesday Addams because that doesn't require me to buy a costume (so many old shirts and skirts in my closet!) and I don't have to cover up my undereye circles. In fact, I just have to exaggerate them, which is even better.

My friend Krystal on Tumblr asked if I could make a tutorial for this Alice in Wonderland inspired look and as soon as I saw the pictures, I knew I had to try it. 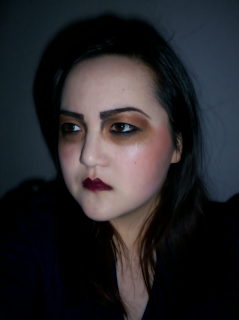 Of course, I haven't done anything with my hair because it's stubborn and I'm lazy, but if you're looking to copy something like the inspiration photos, I'd suggest curling your hair with a tighter iron, something close to 3/4" if possible, and brushing out some of the curls but not all of them. Mess up your hair with your fingers and pin it up haphazardly, or leave it down!

By the way, glasses are a huge hindrance when doing looks like this. I wasn't quite sure what I was doing with my glasses off trying to get the circle around my eye right, but it doesn't look that bad. 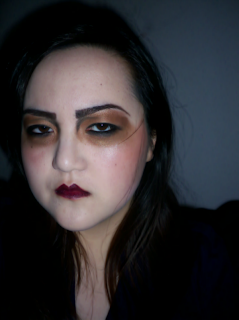 This photos is hilarious mostly because I look really unamused and trust me... I was. I think I might have stabbed my waterline with the wood of my black eyeliner and it still stings, so no heavy eye makeup for this girl for at least a few days until I make sure nothing serious happened. Take heed, darling readers: keep your pencils sharp so this doesn't happen to you!

This whole look is meant to look a little deconstructed and messy, so don't panic if you think you've made a huge mess. It's supposed to be haphazard and rushed!