look of the day - autumn trends

I originally wanted to make another Halloween look today, specifically a monkey look, but I ended up helping my mom in the kitchen for over two hours and all the pictures I Googled for inspiration did nothing. The really good ones required prosthetics (or liquid latex, at the very least, and I don't have any of that lying around!) and the others just weren't cutting it. So instead, I did a look with some of the products I mentioned in this post about my favourites for fall. 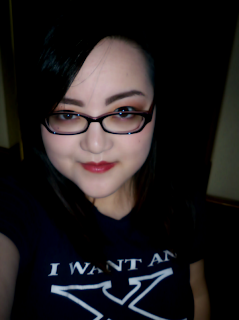 When you've worn glasses for 17 of your 22 years of life and then start taking photos without them on, you realise the harsh truth: dark circles exist. My glasses have covered them for my entire life--either them or their shadow, and now I take photos and remain bewildered when I look like I haven't slept in weeks. 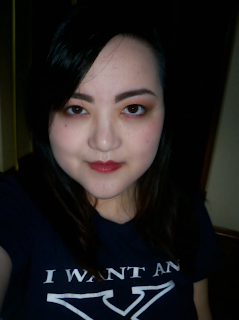 I had a lot of fun with this look regardless. I wanted to put a little sparkle in my brows and originally intended to use Sugarpill's Goldilux, but I found the Shiro shadow and thought that it would be slightly more subtle. Besides, I intend to attempt a gold brow look like Dior's during S/S 14 fashion week.

Also, go out and get RMS Beauty's lip2cheek in Diabolique right now. It's limited edition but it's so perfect for fall that I now own two in case they don't make it permanent like so many people are begging for them to do. I used the slightest bit on my cheeks and it made for such a pretty flush.