Quick, let me write up a post about the Sephora VIB Rouge Spring Social before I forget everything! I wish I brought a camera so I could take pictures, but I left in a hurry and totally forgot.

Sunday, 30 March was the start of the VIB Rouge sale and Sephora stores across the country held a closed-door event for the most dedicated to beauty. I RSVPed at the store where my friend Erica works because it happens to be bigger than the one in my hometown's mall. It was two hours of being in a Sephora store, complete with coffee and snacks. (Neither of which I got, as I don't drink coffee and I was sort of so caught up in makeup that I forgot to pick up food. Whoops!) There were stations for facials, hairstyles, and makeup applications and all the employees were so welcoming and helpful.

I was very overwhelmed at first, but after I woke up a bit, I went to the facial station first. They had three options: anti-aging, brightening, and detox. I chose detox because my skin has been freaking out all winter. I don't remember the cleanser they used, but it smelled wonderful and didn't really irritate my skin. The woman helping me asked about how my skin has been and I told her about how my skin has been freaking out all winter--it's normally combination leaning oily everywhere except for my cheeks--how there have been a lot of dry patches for no reason and she asked about exfoliation. I have a scrub that I use occasionally, but lately I've been using my Clarisonic a little more often, and she told me that I might need to use another product on top of the Clarisonic since that only provides mild exfoliation. She used the First Aid Beauty Facial Radiance Pads for this. Next, she put a mask on (Perricone MD Chloro Plasma mask) for a minute or two, then put on a Dr. Brandt eye cream. I don't exactly know what the product was, but I'm guessing that it was the Xtend Your Youth eye cream. She finished off with some Kate Somerville Dilo Oil Restorative Treatment and Shiseido Ibuki Protective Moisturiser Broad Spectrum SPF 18.

Now, I'm a bit of a dumbass and should have asked her about the SPF before she put it on because chemical sunscreens make me peel, and that's exactly what was in this one. It was mild, but I know for a fact that octinoxate irritates my skin, but I didn't react quickly enough. Whoops!

Another big oops: I shouldn't have gotten my foundation matched right after getting my face cleaned and rubbed and all that because I got a match for something MUCH darker than I have ever used. (2R05, if that means anything to any of you. I was expecting to be 1Y03.) The foundation that they used was MUFE's Liquid Lift foundation in 1 Porcelain, which seemed to work out all right, but another match was Cover FX cream foundation in N40 which is definitely not what I tested before. N20 was a better match!

I got my makeup done by another lady using the Sephora and Pantone collaboration set focused around the colour of the year, Radiant Orchid. Katina came around and told me I looked like a rose, which was awesome, but I definitely felt a little naked without my brows done. (I didn't do my makeup before going because that would have been a WASTE.) The lipstick for this year definitely seems more pink than radiant orchid, so that was mildly disappointing. In the picture below, I'm wearing a different lipstick that seems to match the theme a lot more... And I filled in my brows. Everything else was done in store! 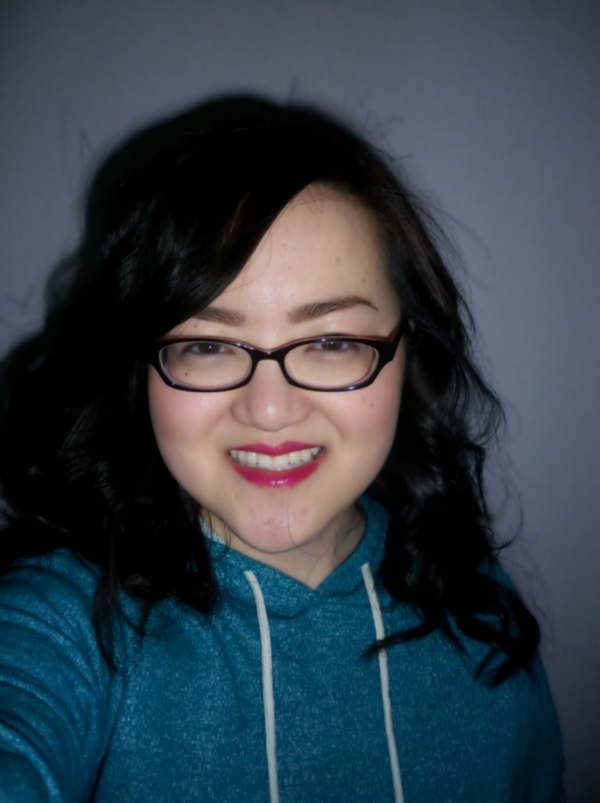 (Anything marked * was from the SEPHORA+PANTONE UNIVERSE The Face: Radiant Femme Artistry Set.)


The last station was hair and oh my goodness, let me just say that I waited for a good 15ish minutes because I really wanted my hair done and it was WORTH IT. The three options were a blowout, an evening look (someone said it was a braid of some sort?), and beachy waves and Katina immediately told me BEACHY WAVES with much enthusiasm. The woman doing everyone's hair was phenomenal. She curled my hair in about 10 minutes. Usually it takes me two hours and it wouldn't look half as awesome as it did. 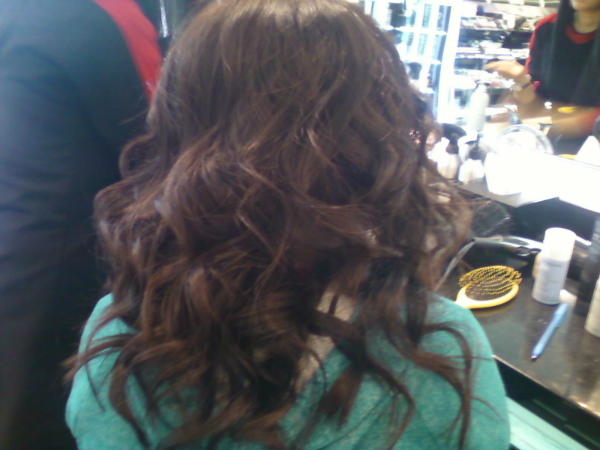 Katina took that picture of my hair right after it was finished. Look at how awesome it looks.

And here's a few pictures of what I bought in store. Erica rang me up and told me that she expected me to do more damage (which I ended up doing online later on in the week...) but I thought I'd try to spread it out. 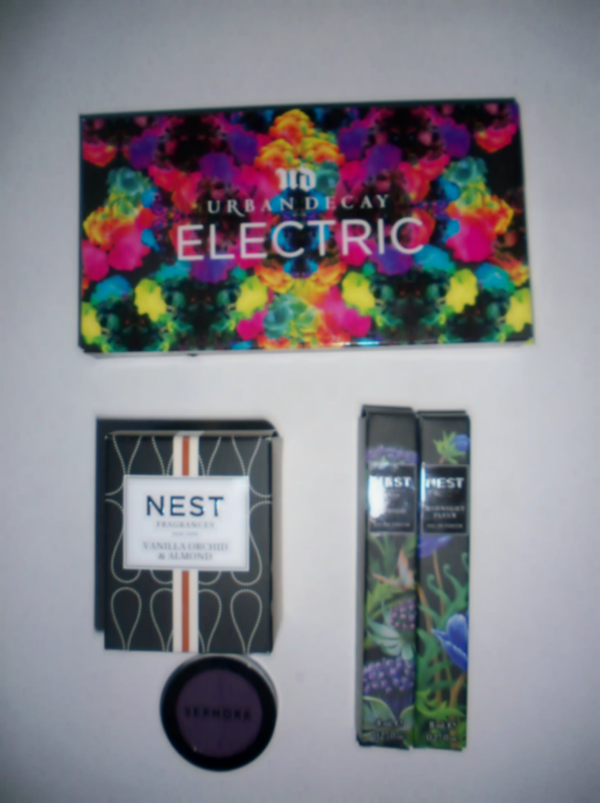 Pictured are the Urban Decay Electric Palette (OH MY GOD, BRIGHT COLOURS!), two Nest Fragrances rollerballs (Midnight Fleur and Indigo, the latter of which is possibly one of my favourite scents ever--the Nest candle was free with a $50 purchase!), and a Sephora matte eyeshadow in the shade Blueberry Muffin for when I finally decide to do my purple gradient brows.

I did a bit of a look of the day today, as well. It's sort of Game of Thrones-themed because S4 premieres tomorrow and I have something else planned for tomorrow, but I found myself wearing a GoT shirt and went a bit House Arryn. 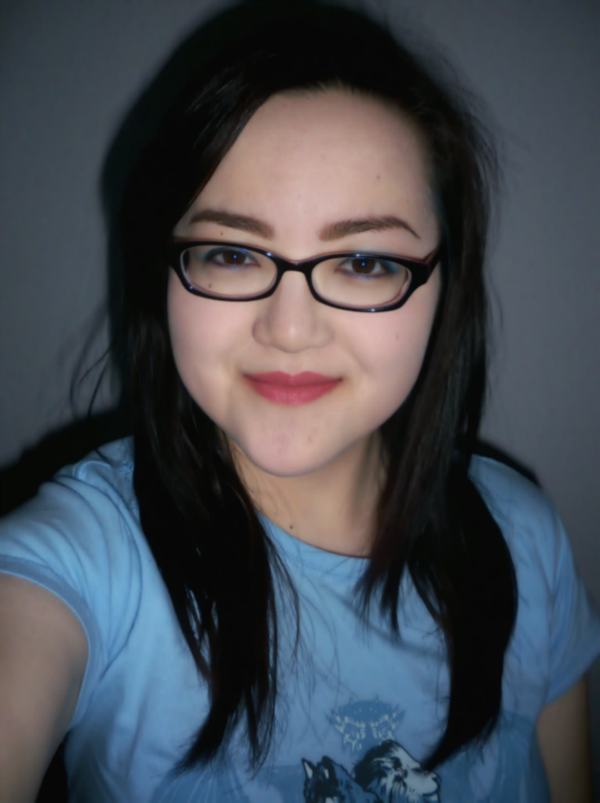 No tutorial today because the look was basic, haphazard, and not that important, but hopefully I'll be able to write up something great for tomorrow. Also, I took a picture of the shirt but it looked really creepy and a little too propositioning, sooo...