Greetings! It's been a long time since my last post. Last week was Thanksgiving (I hope you all had a good holiday if you celebrate, or a good start to Hanukkah, or you just had a good weekend. Maybe you all went shopping and I hope you got what you wanted!) and my sister was home for the week. Her first semester of university is almost over and it's weird.

I've been in a bit of a poor mood as of late, so I haven't had much inspiration to post anything. But I did do this look over a week ago and it's about time that I show you all! I'll admit that I'm not the most dedicated fan of LOTR or The Hobbit, if only because I was really behind in watching the LOTR trilogy and now I'm only just catching up. Regardless, everyone knows that the elves of Middle Earth are arguably the best race, and at the very least, they're certainly very pretty. Any mention of elves and I immediately think of how glowing and gorgeous they always are, and they're usually surrounded by blue tones. 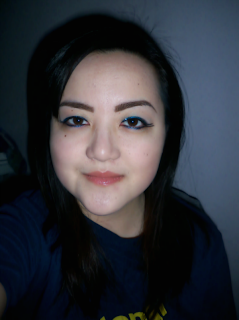 This look focuses heavily on blue and white and is a bit heavier than what you'd see in the movies, but rest assured that it was intentional. In the first Hobbit film, the elves seem to be after their own interests, so they seem darker as a whole than they did in the LOTR films. In the second film, they feature heavily in the trailers and I'm really excited to see them in action, especially Thranduil the Khaleesi. (Come on, did you all see his sassy cape removal? It was straight out of Anastasia!)

I couldn't help myself--I had to pay homage to Lee Pace's fabulous eyebrows, so the brows in this look are darker than I usually do. The dark liner is in part inspired by Egyptian makeup, but the double liner also serves as a reminder that the elves aren't always there to be the good guys. The most important part of this look is the glitter. 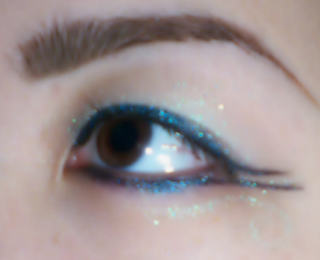 LOOK AT HOW IT SPARKLES. For some reason, the little curlicues I drew on with a sparkling white shadow were hardly visible unless I did a close-up like this. If you look closely, there's one underneath my eye. I would advise drawing these in with a white eyeliner and then putting eyeshadow over that if you want it to look more noticeable! 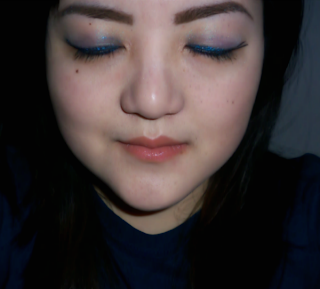 You can see that there isn't much colour on the lid. Most of the eyeshadows I used rely on duochrome and iridescence, so certain angles will show more saturation and different shades. I also had a lot of transfer from the liner onto my crease, so that's why it's kind of darker than I had originally planned. Whoops!

I think I'll do an elf look that is more based on what Galadriel and Arwen (and Tauriel, though her look seems more simple) wear in the films, so keep an eye out for that!
Posted by Jen at 5:28 PM